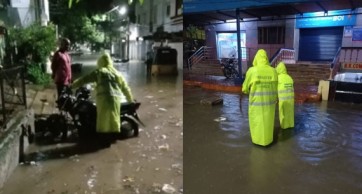 A two-wheeler was washed away in Mallepally area, while water entered houses in Nampally area in the heart of the city.

Streets in several areas turned into lakes and cellars in many apartment buildings were flooded, damaging vehicles.

Residential areas on the outskirts, especially those adjacent to lakes, continue to suffer because of severe water stagnation caused by the second heavy spell on Monday night that occurred in the last three days.

People in low-lying areas spent a sleepless night. Residents in Saroornagar, Kodandaram Nagar and some other colonies faced severe hardships due to overflowing drains and lakes.

GHMC officials said heavy rainfall of over 9 cm was recorded in some parts of the city.

Water was overflowing the Moosarambagh causeway across Musi river. Vehicular traffic also came to a halt under Malakpet bridge.

Musi is in spate as the twin reservoirs across the river continue to receive massive inflows from upstream. Flood water is being released from both Osman Sagar and Himayat Sagar.

Hyderabad Metro Water Supply and Sewerage Board (HMWS&SB) is releasing 1,278 cusecs of water from Osman Sagar into Musi, which flows through the city. The inflows at the reservoir were 1,200 cusecs. The current water level in the reservoir was 1,787 feet against Full Tank Level (FTL) of 1,790 feet.

Himayat Sagar was also receiving inflows of 325 cusecs. Authorities are releasing 330 cusecs of water into Musi. The water level in the reservoir on Tuesday morning was 1,760.70 feet against FTL of 1763.50 feet.

With massive inflows of rain water continuing, Hussain Sagar lake in the heart of the city was full to its brim. The water level in the lake was 513.45 meters against FTL of 513.41 metres. The excess water is being let out through vents.

People living in areas downstream have been alerted.