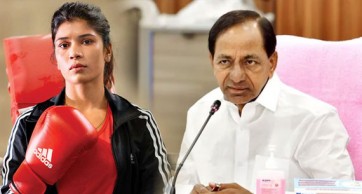 He spoke to Zareen on phone and commended her. "By winning the gold medal, Nikhat has not only made entire India proud, but also taken its glory a few notches higher," he said.

KCR, as the Chief Minister is known, praised the boxer for continuing the winning streak. He said that Zareen's victory has once again brought laurels to Telangana world over.

The CM reiterated that the state government will continue encouraging sports persons.

She said it was a matter of great pride that Nikhat Zareen once again brought laurels to the state and the country.

Zareen won the Commonwealth gold nearly three months after bagging the gold in the world championship.

The 26-year-old hails from Nizamabad town of Telangana.