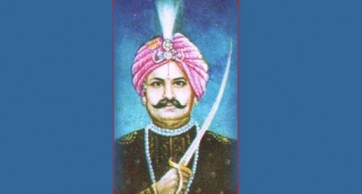 Hyderabad, Aug 6 (IANS) Uyyalawada Narasimha Reddy is hailed as the 19th-century hero who led the first mass rebellion in Andhra Pradesh against the British.

Descendant of a dispossessed Polygar family, once a powerful feudal class of chieftains who looked after administrative matters in villages, he led a mass uprising against the tyranny of the British in 1846.

He organised an army of 5,000 villagers in Koilkuntla Taluk (now in the Nandyal district of Andhra Pradesh) and was executed in the cruelest manner. His skeleton was kept hanging in a cage for several years until 1877.

However, the revolt went down in history as inspirational for the later struggles for India's freedom.

'Sye Raa Narasimha Reddy' a Telugu language biopic released in 2019 highlighted the story of one of the early freedom fighters. With superstar Chiranjeevi playing Narasimha Reddy, the movie projected the 19th century hero with a high dose of nationalism.

However, historians are of the view that the rebellion led by Narasimha Reddy was not about nationalism. According to them, as the chieftain of Koilkuntala, Reddy challenged the British after the latter tried to remove the privileges accorded to the Polygars and also attempted to acquire their estates.

K. Venugopal Reddy, history professor at the University of Pondicherry, wrote in 'Dominance and Resistance: A study of Narasimha Reddy's Revolt in Andhra Pradesh' that the revolt in Koilkuntla was mainly against colonial oppression and all sorts of dominations.

The ruthless policy of the British to root out the Polygars was equally met with stiff resistance from the former overlords. Thus, it was a revolt against the illegitimate British hegemony and its attempts at subduing the people and colonizing the territories. The peasants and other classes of people, who were mostly affected due to the oppressive policies of the East India Company, also supported those who took up arms against the alien rulers.

According to Venugopal Reddy, economic distress of peasants and of all sorts of economic grievances of Kattudadies and Bhattavartithies in Koilkuntla Taluk led them to revolt against the British for which Narasimha Reddy had assumed leadership.

The revolt of Narasimha Reddy in the Ceded districts was a unique instance of thousands of peasants taking up arms when their livelihood was threatened by the proposed Inam regulations.

Confiscatory proceedings and unlawful regulations coupled with fiscal oppression attracted the disinherited sons of the soil to the standard of revolt raised by Narasimha Reddy, the poor son of a former Polygar.

"The insurrection was in the first instance solely that of Kattubadies and their friends. But when thousands of lower class peasants flocked to the standard of Narasimha Reddy in the seizure of the Tahsildar and driving away all public servants, it became a widespread mass revolt where peasants and other lower classes had played a remarkable role," Reddy noted.

"Colonialism necessarily produces resistance of its own. This becomes perceptible, when agrarian economy was in the midst of a painful process and strained phase of transformation in the first half of the 19th century as a consequence of the colonial agrarian policies, the communities affected by the development chose to defy the colonial state. It is in this context that the revolt of Polygar Narasimha Reddy in Koilkuntla Taluk becomes critically significant," the social scientist added.

According to him, the revolt of Narasimha Reddy was actually a rebellion of more than 5,000 peasants of the Cuddapah district in 1846. The peasants and lower class people in the Taluk, who had long standing grievances under the British administration, had supported the Polygar Narasimha Reddy's revolt against alien rule.

The author observed that the peasants of the ceded districts ever since the establishment of the British Company regime continued to suffer from fiscal oppression and fear of deprivation, consequent on revenue regulations introduced by the British in the first half of the 19th century.

The British company officials failed to take cognisance of the interests of the native peasants. The village headmen who were everything for the village community did feel the discontinuance of their ancient privileges with the introduction of new land revenue regulations.

Venugopal Reddy wrote that the opposition to British rule could be organised only by the dispossessed Polygars, who had intimate contacts with the people. Although the Polygars were actuated by their ambition to revive and re-establish their authority with all their privileges and prerogatives, they also protested through their revolts against the fiscal oppression and deprivation that affected all classes of people.

Their wealth had been drained by a foreign power and the hierarchy of dependents in their dominion was deprived of their means of livelihood. Their supporters were now the peasants who rallied to fight against British rule. It was at this time that Polygar Narasimha Reddy realised the situation and seized the opportunity to revolt against the British with the support of different classes.

The British officers had issued warrants for the apprehension of about 1,000 rebels of which one half were kattubadies or village hereditary police. A total of 112 rebels were convicted along with Narasimha Reddy, who was sentenced to death.

The sentence was carried out at Koilkuntla at 7 a.m. on February 22, 1847. It was reported by Acting Collector J. H. Cochrane that the capital punishment was to make a great impression on the spectators, the number of whom exceeded 2,000 and there was a deep silence that had prevailed when the awful ceremony was performed.

The revolt started by Narasimha Reddy ended with his execution. His body (skeleton) remained hanging in a cage for several years in Koilkuntla until 1877. But this event had left its imprint in the minds of the people.

As a tribute to Uyyalawada Narasimha Reddy, Andhra Pradesh government last year named Orvakal Airport in Kurnool district after him. Chief Minister Y. S. Jagan Mohan Reddy announced that since Uyyalawada came from this region, the airport will be named after him.